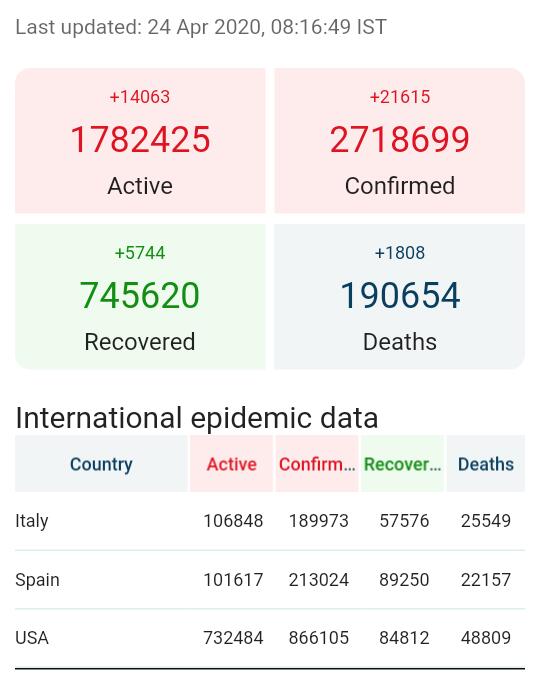 The charts above are updated after the close of the day in GMT+0. See more graphs

Reported Cases and Deaths by Country, Territory, or Conveyance


New York State Governor Cuomo said that preliminary findings from an antibody study conducted on 3,000 people at grocery stores across New York State found a 13.9% had coronavirus antibodies, suggesting a 13.9% actual infection rate statewide (21.2% in New York City), which translates to an estimate of about 2,700,000 actual cases in New York State (10 times more than the about 270,000 cases that have been detected and reported officially). Governor Cuomo acknowledged that the official count reported by New York State (which still is not including probable deaths as recommended by the new CDC guidelines) of about 15,500 deaths is "not accurate" as it doesn't account for stay at home deaths. Based on Worldometer's count (which includes probable deaths reported by New York City) of about 21,000 deaths and the 2,700,000 case estimate from the new antibody study, the actual case fatality rate in New York State could be at around 0.78% [source]
NOTE: Montgomery County (PA) has lowered the reported number of deaths substantially, affecting today's count as well as the previous days statewide figures.
The French Government has corrected its case numbers after a quality and verification process of data from EMS & EHPAD establishments highlighted over-reporting and overestimation of cumulative cases [source]. To reflect the correction made by the French Government, Worldmeter has adjusted the numbers for today and historically. [source]
NOTE: Case total remains at 1451 as 3 of yesterday's cases were officially retracted as already recorded elsewhere. Yesterday's total has been changed to 1448.
Death of a 62-year-old woman with an underlying condition. She had been intubated and sedated for the last 2 weeks. Arrangements were made to allow her family to be with her when she died. Director-general of health Dr Ashley Bloomfield addressed concerns that the family had been given false hope when the woman's condition was reported as stable earlier in the week. The term "stable" meant there had been no change in her condition, he explained. On Tuesday, Bloomfield said at his daily press conference none of the patients in hospital were critical; yesterday he said they were stable, according to NZ Herald. Prime Minister Jacinda Ardern said the Government was considering changing the way it reported patients' conditions.  [source] [source] [source]

How dangerous is the virus?

There are three parameters to understand in order to assess the magnitude of the risk posed by this novel coronavirus:


How contagious is the Wuhan Coronavirus? (Ro)

The attack rate or transmissibility (how rapidly the disease spreads) of a virus is indicated by its reproductive number (Ro, pronounced R-nought or r-zero), which represents the average number of people to which a single infected person will transmit the virus.
WHO's estimated (on Jan. 23) Ro to be between 1.4 and 2.5. [13]
Other studies have estimated a Ro between 3.6 and 4.0, and between 2.24 to 3.58. [23].
Preliminary studies had estimated Ro to be between 1.5 and 3.5. [5][6][7]
An outbreak with a reproductive number of below 1 will gradually disappear.
For comparison, the Ro for the common flu is 1.3 and for SARS it was 2.0.

See full details: Coronavirus Fatality Rate
The novel coronavirus' case fatality rate has been estimated at around 2%, in the WHO press conference held on January 29, 2020 [16] . However, it noted that, without knowing how many were infected, it was too early to be able to put a percentage on the mortality rate figure.
A prior estimate [9] had put that number at 3%.
Fatality rate can change as a virus can mutate, according to epidemiologists.
For comparison, the case fatality rate for SARS was 10%, and for MERS 34%.


Incubation Period (how long it takes for symptoms to appear)

See full details: COVID-19 Coronavirus Incubation Period
Symptoms of COVID-19 may appear in as few as 2 days or as long as 14 (estimated ranges vary from 2-10 days, 2-14 days, and 10-14 days, see details), during which the virus is contagious but the patient does not display any symptom (asymptomatic transmission).


Age and conditions of Coronavirus cases

See latest findings: Age, Sex, Demographics of COVID-19 Cases and Deaths
According to early estimates by China's National Health Commission (NHC), about 80% of those who died were over the age of 60 and 75% of them had pre-existing health conditions such as cardiovascular diseases and diabetes.[24]
According to the WHO Situation Report no. 7 issued on Jan. 27:
A study of 138 hospitalized patients with NCIP found that the median age was 56 years (interquartile range, 42-68; range, 22-92 years) and 75 (54.3%) were men.[25]
The WHO, in its Myth busters FAQs, addresses the question: "Does the new coronavirus affect older people, or are younger people also susceptible?" by answering that:

The patient who died in the Philippines on February 2, in what was the first death occurring outside of China, was a 44-year-old Chinese man from Wuhan who was admitted on Jan. 25 after experiencing fever, cough, and sore throat, before developing severe pneumonia. In the last few days, “the patient was stable and showed signs of improvement, however, the condition of the patient deteriorated within his last 24 hours resulting in his demise." according to the Philippine Department of Health.

As of Jan. 29, according to French authorities, the conditions of the two earliest Paris cases had worsened and the patients were being treated in intensive care, according to French authorities. The patients have been described as a young couple aged 30 and 31 years old, both Chinese citizens from Wuhan who were asymptomatic when they arrived in Paris on January 18 [19].

See full details: WHO coronavirus updates
On January 30, the World Health Organization declared the coronavirus outbreak a Global Public Health Emergency.
For more information from the WHO regarding novel coronavirus: WHO page on Novel Coronavirus (2019-nCoV)