Pride and Prejudice by Jane Austin 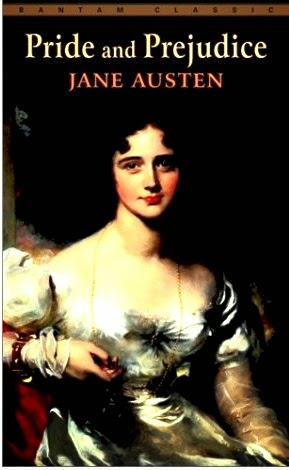 Pride and Prejudice is a classic novel and an adorable work by Jane Austin. Its first edition was published in 1813. The story includes the main character Elizabeth Bennet as she deals with issues of manners, upbringing, morality, education, and marriage in the society of the landed gentry of early 19th-century England. Elizabeth is the second of five daughters of a country gentleman living near the fictional town of Meryton in Hertfordshire, near London.

Although the story is set at the turn of the 19th century, it retains a fascination for modern readers. It continues to exist near the top of lists of "most loved books". Considered as one of the most popular novels in English literature, it receives considerable attention from literary scholars. Modern interest in the book has resulted in a number of dramatic adaptations and an abundance of novels and stories imitating Austen's memorable characters or themes. To date, the book has sold some 20 million copies worldwide.
If critically evaluated this novel tends to bring an evolution in the society by exposing its harsh reality of conspiracies, jealousies, etc.
I rate this book 4 out of 5 stars.


Abstract Of  The Novel

The novel’s main character Elizabeth Bennet supposes to be the second of the five daughters of a country gentleman. Mr Bennet. He is a bookish man, and rather casual of his responsibilities. Mrs Bennet, his wife is a woman deficient in social graces. Mainly concerned with finding suitable husbands for her five daughters, she keeps hunting for a perfect match for her daughters. Features of the daughters along with the name are as follows- Jane Bennet, the eldest one distinguished by the kindness of her attitudes and her beauty. Elizabeth Bennet, the second daughter, sharing her father's keen drollness and sarcastic outlook on several occasions. Mary being studious, devout and musical albeit lacking in taste but not considered pretty. Kitty, the fourth sister follows where her younger sister leads, while Lydia is coy and unrestrained.

The scene opens with news in the Bennet family with the introduction of Mr Bingley, a wealthy, charismatic and sociable young bachelor, is moving into Netherfield Park in the neighbourhood. Mr Bingley is well received in the few moments after his arrival, while his friend Mr Darcy leaves a less favourable impression by appearing swollen with pride and condescending at a ball that they attend (he detests dancing and is not much for light conversation). Mr Bingley singles out Jane for particular attention, and it soon becomes apparent that they have formed an attachment to each other, though Jane does not alter her conduct for him, confessing her great happiness only to Lizzie. By contrast, Darcy slights Elizabeth, who overhears and jokes about it despite feeling a budding resentment.

One evening while paying a visit to Mr Bingley's sister, Caroline, Jane is held in a heavy downpour accompanied by more trouble in the form of cold, and is enforced to stay at Netherfield for several days. Elizabeth arrives to foster her sister and happen to be in frequent company with Mr Darcy, who begins to act emotionally towards her.
Mr Collins who by profession is a clergyman and heir to the Bennet estate, visits the Bennets. Mr Bennet and Elizabeth amused by his sycophantic adoration of his employer, the noble Lady Catherine de Bourgh, as well as by his self-important and obscure nature. It soon becomes plain as the nose one’s face that Mr Collins has come to Longbourn with a motive to choose a wife for himself amongst the Bennet sisters (his cousins) and Elizabeth is singled out. Elizabeth forms an acquaintance with Mr Wickham, a militia officer who relates having been very seriously ill treated by Mr Darcy, despite having been a godson and favourite of Mr Darcy's father. Elizabeth's attraction to Mr Wickham, increase her dislike of Mr Darcy happens to be directly proportional.

At a ball given by Mr Bingley at Netherfield, Mr Darcy becomes aware of a general expectation that Mr Bingley and Jane will marry, and the Bennet family, with the exception of Jane and Elizabeth, make a public display of poor manners and decorum. The following morning, Elizabeth refuses Mr Collins proposal for marriage.the action was a result of much to her mother's distress. Mr Collins on recovering gets engaged to Elizabeth's close friend Charlotte Lucas, a homely woman with few prospects. Mr Bingley abruptly quits Netherfield and returns to London, devastating Jane, and Elizabeth becomes convinced that Mr Darcy and Caroline Bingley have colluded to separate him from Jane. Jane, persuaded by letters from Caroline Bingley accepts that Mr Bingley is not in love with her, but goes on an extended visit to her aunt and uncle Gardiner in London in the hope of maintaining her relationship with Caroline if not with Charles Bingley. Whilst there she visits Caroline and eventually her visit is returned. She does not see Mr Bingley and is forced to realize that Caroline doesn't care for her.

In the spring, Elizabeth visits Charlotte and Mr Collins in Kent. Elizabeth and her hosts are frequently invited to Rosings Park, home of Lady Catherine de Bourgh, Darcy's aunt; coincidentally, Darcy also arrives to visit. Elizabeth meets Darcy's cousin, Colonel Fitzwilliam, who vouches for Darcy's loyalty, using as an example how Darcy had recently stepped in on behalf of a friend, who had formed an attachment to a woman against whom "there were some very strong objections." Elizabeth rightly assumes that the said friend is none other than Mr Bingley, which enhances her dislike of Darcy. Thus she is of no mood to accept when Darcy arrives and, quite unexpectedly, confesses love for her and begs her hand in marriage. His proposal is flattering, he is a very distinguished man, but it is delivered in a manner ill suited to recommend it. He talks of love but also of revulsion at her inferior position and family.

Despite assertions to the contrary, he assumes she will accept him. Elizabeth rebukes him, and a heated discussion follows; she charges him with destroying her sister’s and Bingley's happiness, with treating Mr Wickham disgracefully, and with having conducted himself towards her in an arrogant, in human-like manner. Mr. Darcy, shocked, ultimately responds with a letter giving a good account of his actions: Wickham had exchanged his legacies for a cash payment, only to return after frittering away the money to reclaim the forfeited inheritance; he then attempted to elope with Darcy's young sister Georgiana, and thereby secure her fortune for himself. Regarding Jane and Bingley, Darcy claims he had observed no reciprocal interest in Jane for Bingley, and had assumed her not to be in love with him. In addition to this, he cites the "want of propriety" in the behaviour of Mr and Mrs Bennet and her three younger daughters. Elizabeth, who had previously despaired over this very behavior, is forced to admit the truth of Mr Darcy's observations, and begins to wonder whether she has misjudged him.Elizabeth tells her father that Darcy was responsible for uniting Lydia and Wickham. Some months later, Elizabeth and her aunt and uncle Gardiner visit Pemberley, Darcy's estate, believing he will be absent for the day. He returns unexpectedly, and though surprised, he is gracious and welcoming. He treats the Gardiners with great civility, surprising Elizabeth who assumes he will "decamp immediately" on learning who they are.


Darcy introduces Elizabeth to his sister, and Elizabeth begins to acknowledge her attraction to him. Their re-acquaintance is cut short, however, by the news that Lydia has eloped with Mr Wickham. Elizabeth and the Gardiners return to Longbourn (the Bennet family home), where Elizabeth grieves that her renewed acquaintance with Mr Darcy will end as a result of her sister's disgrace.Lydia and Wickham are soon found, and persuaded to marry thus enabling the Bennet family to preserve some appearance of decorum. Jane, Elizabeth and Mr Bennet realise that their Uncle Gardiner must have bribed Wickham to marry Lydia and are ashamed of their indebtedness and inability to repay him. Mrs Bennet, quite typically has no such scruples and is ecstatic. Mr and Mrs Wickham visit Longbourn, where Lydia lets slip that Mr Darcy was in attendance at their wedding but that this was to have been a secret. Elizabeth is able to discover by letter from her aunt Mrs Gardiner, that in fact Mr Darcy was responsible for finding the couple and negotiating their marriage, at great personal and monetary expense. Elizabeth is shocked and flattered as "her heart did whisper that he had done it for her" but is unable to dwell further on the topic due to Mr Bingley's return and subsequent proposal to Jane, who immediately accepts.

Lady Catherine de Bourgh pays an unexpected visit to Longbourn. She has heard a rumour that Elizabeth will marry Mr Darcy and attempts to persuade Elizabeth to agree not to marry. Lady Catherine wants Mr Darcy to marry her daughter (his cousin) Anne De Bourgh and thinks Elizabeth is beneath him. Elizabeth refuses her demands. Disgusted, Lady Catherine leaves, promising that the marriage can never take place. Elizabeth assumes she will apply to Darcy and is worried that he may be persuaded. Darcy returns to Longbourn. Chance allows Elizabeth and Darcy a rare moment alone. She immediately thanks him for intervening in the case of Lydia and Wickham. He renews his proposal of marriage and is promptly accepted. Elizabeth soon learns that his hopes were revived by his aunt's report of Elizabeth's refusal to promise not to marry him.


The novel closes with a "happily-ever-after" chapter including a summary of the remaining lives of the main characters. There is no description of either Jane or Elizabeth's wedding. None of the characters change very much in this summary, but Kitty has grown slightly more sensible from association with Jane and Elizabeth and distance from Lydia, and Lady Catherine condescends to visit the Darcys’ eventually.